A Song of Stars

In the shining night sky, beside the great expanse of the river of stars called the Milky Way, lived a beautiful young princess named Chauchau. Daughter of the Emperor of the Heavens, she lived in a small house perched on the edge of her very own star.
Amazon
Local Library Branch
Goodreads 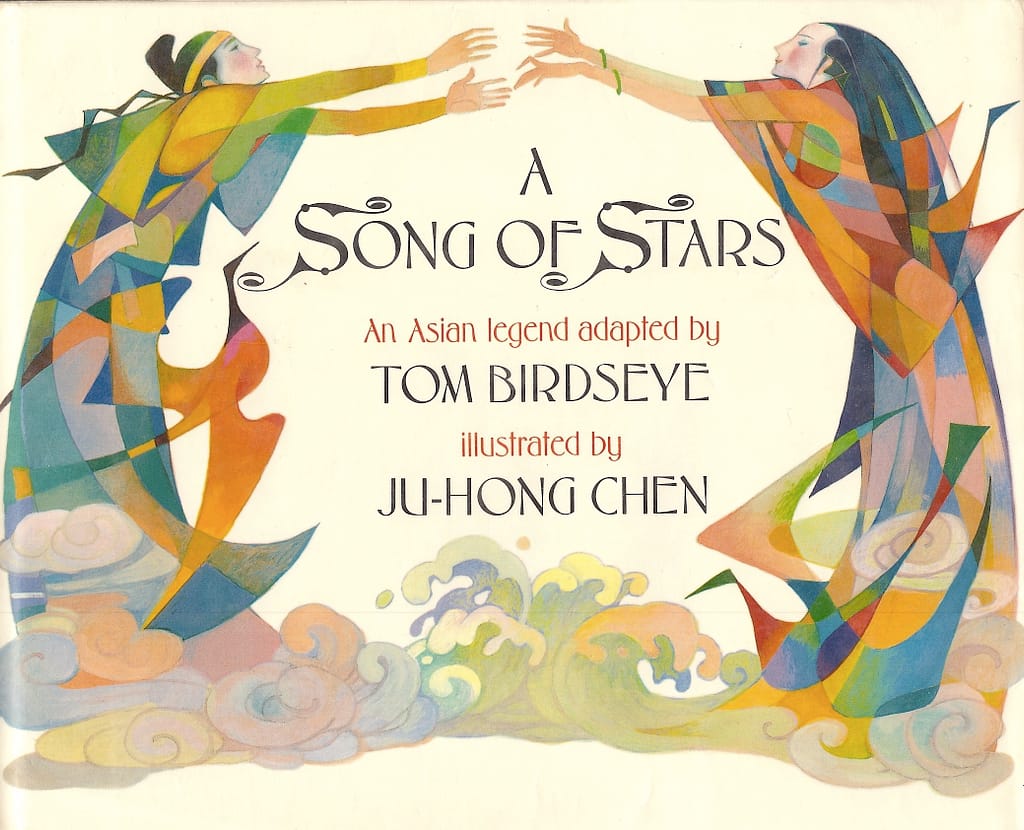 Princess Chauchau was a weaver – not of wool or silk, but of the shimmering threads of the firmament. She was happy and always young, singing soft songs that only her cloth could hear.

Newlang was a herdsman. He too sang soft songs, so soft that only his ox could hear.

One day, Chauchau and Newlang fell in love. They walked together by the great expanse of the Milky Way, singing the same soft song, a song of love for all to hear.

At first the Emperor of the Heavens was pleased with their love. But as they began to neglect their work, he became angry and decided to separate them. His daughter Chauchau would live on one side of the Milky Way, Newlang the herdsman on the other. Only once a year, on the seventh night of the seventh month would they be allowed to cross the river of stars and meet.

This lyrical love story is the inspiration for Chi Hsi, the Festival of the Milky Way in China, and Tanabata, the Weaving Loom Festival in Japan. Both celebrations honor the annual reunion of the herdsman and the princess weaver. Both festivals celebrate love.

In 1983 my wife, Debbie, and I moved from Oregon to Japan to teach English to Japanese children and adults. As in most foreign cultures, there was much to adjust to: raw fish for dinner, no shoes in the house, straw mats instead of carpet, of course the language, and the many festivals, to name just a few. Not only did we adjust to the differences, but over time came to enjoy them very much, especially the raw fish, and the festivals.

On July 7 of that year we went to a festival called Tanabata, celebrated in honor of an ancient story of the stars Vega and Altair, separated on either side of the Milky Way (in Japan, called the River of Stars). Vega is said to be the princess weaver, Altair a herdsman. They are in love, but can only be together on the seventh night of the seventh month (July 7). Poems are written and hung from bamboo poles. Fruits, melons, sweets and cakes are offered in hopes for fair skies so the herdsman can get across the River of Stars. We found it to be a beautiful and moving celebration of love. When we returned to the United States, I wanted to share the story with American kids. A SONG OF STARS is the result of that effort.