A Tough Nut to Crack

Everywhere I look, all I see is Kentucky.
Amazon
Barnes & Noble
Goodreads 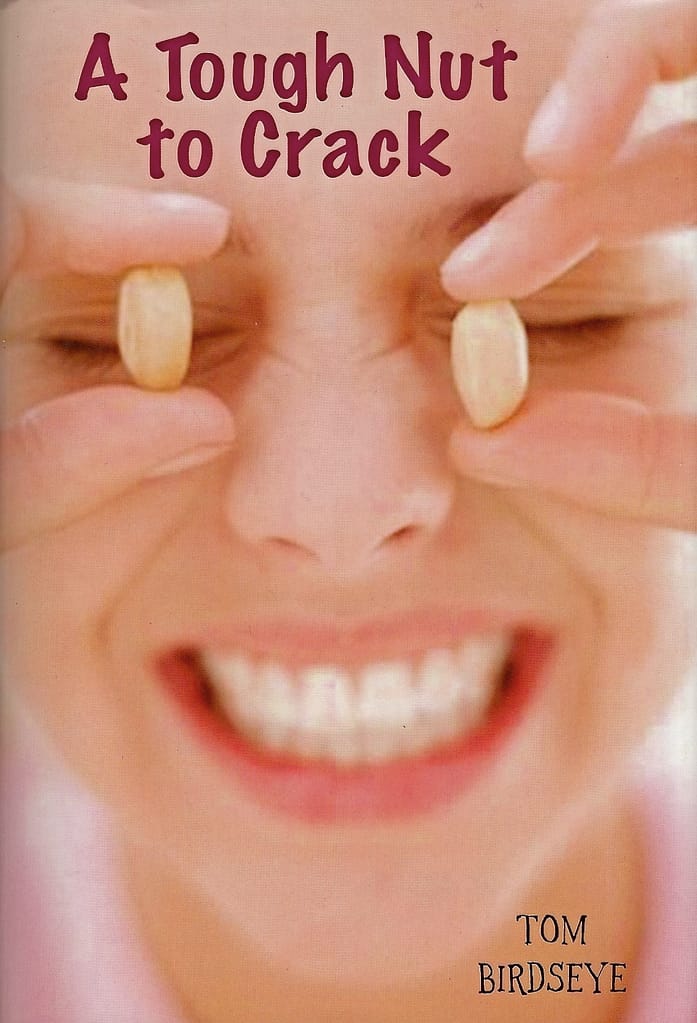 Make that two. City girl Cassie Bell never expected to go to Kentucky, but that’s exactly where she winds up when her grandpa, whom she’s never even met, suddenly needs help on his farm. Country life — and her grandpa — are way different than she ever imagined. She’ll have to contend with the likes of a wild turkey, a love-struck farm boy, and a mysterious grudge between her dad and grandfather. Cassie thinks she’ll have it all figured out in no time, but one thing’s for sure: The Grandpa-Dad problem is going to be a tough nut to crack.

“This slice-of-life story is both sweet and funny . . . detailed setting and strong characters . . . a feel-good read.” – Booklist

“The novel’s simplicity, humor, action, and warmth will appeal to a broad range of readers.” – School Library Journal

“Effectively paced . . . details delivered to great effect . . . each character delivers a unique point of humor to the storyline . . . splendid protagonist . . . friends of family fiction and humor alike will be drawn to Cassie’s quest .” – The Bulletin of the Center for Children’s Books

The story behind A Tough Nut to Crack

Several years ago my family and I visited friends in Maine who lived on a farm. Having had great experiences working for a wonderful Kentucky farmer named Rube Kubale during high school and college, I was excited to find that our Maine friends’ small wheat crop was ready for harvest. We all jumped in to help — kids, too — bumping through the field on the old John Deere combine, bagging the grain in burlap sacks as it came pouring out of the hopper; then hauling the sacks to the barn in the back of a pickup truck, where we dumped the wheat into a cleaner to remove twigs, leaves, and other field debris. That done, we rebagged the wheat for transport to the mill.

Except for one bucket full, which we ground into flour with a hand cranked mill. That evening we made “First Bread” in celebration of work well done and the earth’s amazing bounty. Hot out of the oven and spread with butter, the taste was as perfect as the day had been.

So perfect, in fact, that I felt compelled to write about it, and penned a picture book titled “Harvest Song.” Which I took to the Port Townsend, WA writer’s conference for critiquing. Where the feedback was unanimous: great story, but it’s a novel, not a picture book.

Back to the drawing board.

The multitude of drafts that followed took way more time than I had hoped, as the story morphed, then morphed again, until it hardly resembled what I’d begun. But that’s the way the writing process often works, at least for me. Try to force a plot and I get a story that reads, well, like it was forced. Let the creative process follow it’s natural course, and I just might get something that clicks.

Hopefully, the end result, A TOUGH NUT TO CRACK, will do just that for you — click. To give it a try, read Chapter One below . . .

My brother Quinton is seven years old and knows everything.

If you don’t believe it, just ask him.

Right now he’s educating me on how helicopters fly. “Look, Cassie!” he says, twirling round and round in the kitchen. “They spin like this!”

I turn to Dad, thinking that maybe this time he’ll actually set Mr. Know-It-All straight and tell him that helicopters don’t spin, their blades do. But Dad is busy whistling as he puts away what’s left of the spaghetti and that yummy bread his picked up at the bakery. Besides, he’d probably just laugh. He thinks anything Quinton does is cute beyond belief.

So I let it drop. Because anyway, whether helicopters or their blades spin is not the point. The point is that Quinton is supposed to be helping me scrape the dinner plates and load the dishwasher. And he’s not.

Which, I have to admit, is getting to me. I’m just about to call him on it, when the phone rings.

“I’ll get it!” Quinton shouts, and twirls out of control, crash landing in the garbage can, helicopter butt first.

I stroll over to the phone, taking my own sweet time, smiling. Not because Quinton is sitting in garbage goo with a scowl on his face. But because it’s nice to know that even though life isn’t always fair, and bad things happen that break your heart, there are times when people actually do get what they deserve. I scoop up the receiver, cheerful as can be. “Hello, Bell residence.”

“Well now, ain’t this a sight? I finally got the right number!” The words flow into my ear like syrup, slow and smooth, consonants sounding like vowels, everything rounded. “Clear out there in Portland, Oregon, no less!”

For a second I think it’s my friend Katie putting me on, faking a southern accent for fun. But then I hear: “You must be Harlan’s girl. Cassie, right? Well, honey, I’m a voice from the past, your father’s past, to be exact. He around? I need to jaw at him. It’s about your Grandpa Rubin.”

“Grandpa Rubin?” I blurt out, and instantly regret it. We don’t mention that name at our house. Dad won’t allow it.

But he’s heard me, and it’s like someone threw a switch. He goes from light to dark, from chuckling at Quinton the garbage-can-man to tight lips and storm cloud eyes. “I’ll take it in the bedroom,” he says.

I wait until he’s on the line, and start to hang up. But then I hear that voice again: “Howdy, Harlan, it’s me, Vicki Higgins, your old neighbor. Remember? The one who bonked you in the nose with a dirt clod when we were ten?” And I just can’t resist. I listen in.

“I hate to rain on your evening parade,” Vicki Higgins goes on, “but your daddy’s John Deere tractor crashed into my house this afternoon, right through the sliding glass door, and ended up in my breakfast nook.”

Dad takes in a sharp breath. “You OK?”

“Yes, thank the Lord. I was over by the toaster waiting for a bagel to pop up. Still, it was a bit of a shock. Made me swallow my gum. I yelled at Rubin that he could’ve at least knocked. But then I realized Rubin wasn’t in the driver’s seat. No one was.”

“Uh-oh,” Dad says under his breath.

“Uh-oh is right,” Vicki Higgins agrees. “I followed the tractor’s path of destruction back up the hill, and that’s where I found him . . .”

She pauses, and I can hear her take a deep breath.

“I know you two fell out a long time ago, Harlan, and this is none of my business; but I think you need to come back here lickety-split. You see, when I got to the barnyard, there was your daddy, lying on the ground, . . . right where his tractor had run over him.”

Whoosh! The next thing I know it’s thirty-six hours later; and I’m standing in a place I was sure I’d never be, trying to focus my dazed brain and jet-lagged eyes in the July morning light.

Everywhere I look, all I see is Kentucky.