... Cat felt a lot like a deer in headlights—blinded in the face of oncoming traffic. Before her stood her cousin Ty. Who, just like her, had lost his father on the North Face of Storm Mountain two years ago. Cousin Ty, who, just like her, could understand what it meant to live with—
Amazon
IndieBound
Barnes & Noble 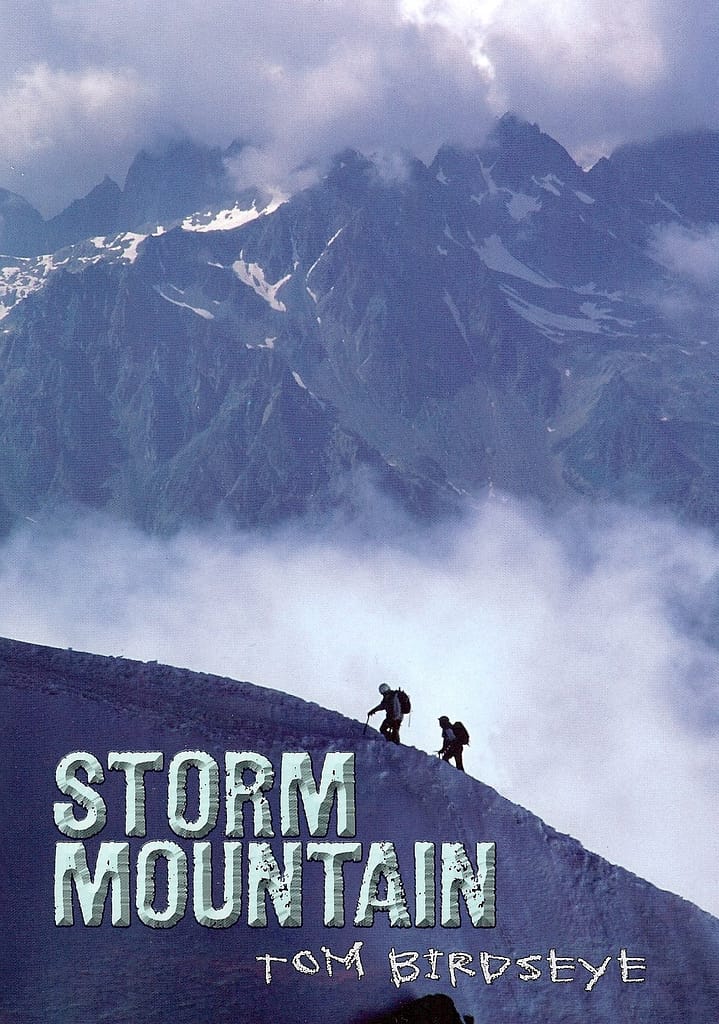 A muffled whump beneath her feet cut Cat short. She looked down to see a jagged crack shoot out across the surface of the snow. . . Avalanche! The world went dark. Blocks of wet snow pummeled her from all sides. She tumbled as if tossed by a giant ocean wave. Crashing, spinning, Cat couldn’t tell up from down. . . . Gagging, frantic for air, Cat grabbed blindly, pulling, swimming, clawing to get to the surface, but seemed to just sink deeper. . . . Like a fool she had walked right into the dragon’s trap. . . . Stupid, she thought, as the dragon’s fist closed in on her. Stupid, stupid, stupid.

It’s stupid, all right, and it’s all Ty’s fault! It was Cat’s impulsive, irrepressible cousin Ty’s harebrained idea to spread the ashes of their late fathers from the summit of the same treacherous mountain that had claimed both their lives. Now Cat must put all of her mountaineering knowledge to work if she and Ty are to survive Storm Mountain.

“The pace of the novel is perfect for a young audience. The action doesn’t quit. A keeper. Engrossing for any reader, any age.”  -Gazette Times

“A touching story about a daughter who wants to honor her mountaineer father. Will appeal to aspiring young climbers who want a taste of the big peaks. Tom Birdseye has more than 30 years of mountaineering experience, and it shows in this page-turning work.”  –Climbing Magazine

The story behind Storm Mountain

In 2007 I hiked the 41-mile Timberline Trail that circles Mt. Hood in the Oregon Cascades. Halfway around, gazing up at yet another stunning view of the iconic peak, it suddenly occurred to me that although I loved mountains and scaling them, I had, in fact, never written anything with a climbing focus. What was with that? Why not combine two of my passions — writing and the alpine realm? It was a head-slapping moment, and in it a book idea was born. By the time I got back to the car, my mind was buzzing with plot and character ideas. Still, it took months of creative incubation and playing with possibilities before the story really began to jell. Initial drafts pointed out the need for more research (aka adventures). Which, I admit, was a blast. Additional versions lead to many changes, both large and small. And more attempts. And more again. Until, at times it seemed as if I’d never finish.

The key to finally completing the novel came, fittingly, by adapting a climber’s mind: “Don’t obsess on the distant summit,” I told myself. “Just the next step. And the step after that. And the step after that. Keep plodding persistently away and eventually you’ll look up and there will no more up to scale!” Word by word, sentence by sentence, scene by scene I kept at it, until I reached the writer’s summit — THE END. Safely back down from those airy heights, I humbly offer up a mountain adventure to you . . .

Cat Taylor opened the oven door and pumped a fist in triumph. “Yes!” She grabbed a pot holder from its wooden peg, took a deep breath to steady herself, then carefully hauled a twelve-inch, homemade pizza out into the warm glow of the kitchen.

“Perfecto!” she said, surveying her masterpiece. “Thin crust, pesto sauce, black olives, and artichoke hearts. Who could ask for more?” She tucked a stray strand of dark hair behind her ear and grinned.

Until she spotted her dog, a Husky named Mugs, sneaking around the corner. The grin dropped. “Hey, you, keep your distance,” Cat warned. “Sit.”

Mugs didn’t sit. He’d made it clear from day one that following directions was not a high priority, especially when there was food to be had. Cat figured that in another life Mugs must have been a pig — with hollow legs. The rascal could flat-out eat. Now the greedy gleam in his eyes shined clear. He’d scarf down every last bit of her prized pizza in a heartbeat if he got the chance.

“No way,” Cat said. She put the baking sheet on the counter. “I agree that this is the best pizza in the world, but Mom made me promise not to feed you human food, remember?”

Cat waited for an answer, then caught herself and thumped her forehead with the palm of her hand. There she went again, talking to Mugs like the dog was human. Ridiculous.

Or was it? Who else was there to talk to at the end of three miles of winding, rutted gravel known as Storm Mountain Road. Trees were plentiful. People were most definitely not.

Of course she texted her friends in town, visited their Facebook pages, and chatted regularly with them on her cell. But it wasn’t the same as having a real person in front of her.

True, her mom, Hope, was usually around. A freelance software developer, she telecommuted out of her office just down the hall. Hope would instantly drop her work if Cat needed anything. She tried really hard to be Cat’s friend, and Cat appreciated the thought. But Hope wasn’t Cat’s friend. She was her mother, and there were some things — no, actually, there were lots of things — that Cat didn’t want to discuss with her mother.

Besides, Hope wasn’t home tonight, anyway. In an uncharacteristic move that had caught Cat completely by surprise, Hope had agreed to give a presentation at a software developers’ conference in Portland. In the past she’d always said she’d rather swim with sharks than speak in public, and yet she’d driven all the way to the city to stand up in front of hundreds of strangers. What was with that? Especially on this particular weekend in May . . . Oh, well, no matter. Bottom line: Mom wouldn’t be back until Sunday afternoon, and that left Cat with Mugs. So even if the pooch didn’t have a lot to actually say, he had a way of looking Cat right in the eye that at least gave the impression he was listening, and understood.

Now Cat leaned down and tussled Mugs’ furry, pointed ears. “It’s you and me, boy,” she said.

Mugs looked up at the countertop, where Cat had set the pizza and whined.

“Patience, Mugsy,” Cat said. “I haven’t forgotten your chow. We’re just dining late because . . . well, because we can!”

Mugs wagged his tail. Cat nodded and grinned. “Yep, we are completely, totally, absolutely in charge of our own destiny. You can gobble as much dog food as you want, and I’m going to savor this entire pizza. Then I’m going to wash it down with a Cat Taylor double-shot mocha and stay up all night if I want to!”

Mugs cocked his head and seemed to smile.

No response, as usual. Despite countless hours of effort on Cat’s part, her dog was simply not into learning tricks.

Cat sighed. “Mugs,” she said, for what felt like the millionth time, “you’re hopeless.”

Mugs answered with a lunge for the countertop and almost nabbed the pizza. Cat scooped it up, laughing. “Get back, you rascal!”

Bang! The knock at the front door boomed so sudden and loud, Cat almost dropped her dinner. “Whoa!”

Bang-bang-bang! The pounding echoed through the house. Mugs bayed like a hound on the hunt and dashed into the living room.

Cat shoved the pizza to the back of the counter and followed her dog, although she wasn’t sure why. Alarm bells were going off in her head. “Who is it, Mugs?” she whispered. “Who would be way out here in the boonies, especially this late at night?”

She tiptoed over to the front window and peeked around the curtain. A face loomed inches from her own, nose plastered flat against the glass, lips curled in a crazed grin.