The Desert Rats, we called ourselves, when we went exploring up the canyon. But now Dad and Mom had done this awful thing -- moved the whole family all the way across the country to this little town called Macinburg, Kentucky -- and it had me as jittery as a chicken at the coyote cafe.
Amazon
Goodreads
Barnes & Noble 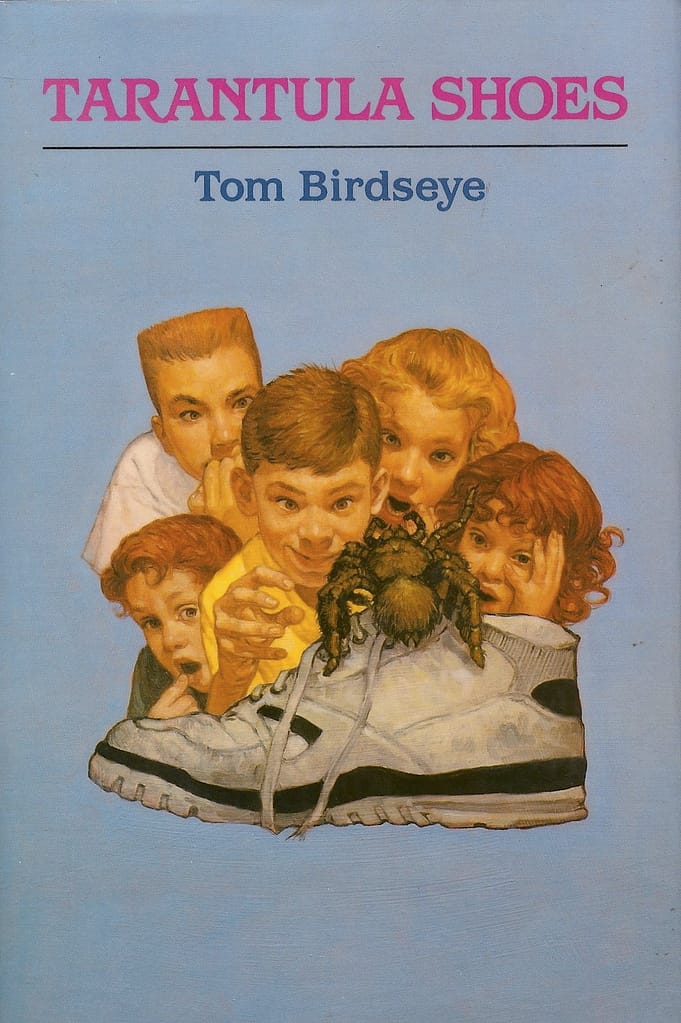 Ryan O’Keefe, eleven years old and short for his age, is nervous about going to a new school. Having just moved from Sierra, Arizona, to Macinburg, Kentucky, he will probably be the newest kid in the class. Even worse, he’ll be entering sixth grade in junior high, where he’s heard the seventh and eighth graders play tricks on the younger kids.

But Ryan has one glimmer of hope. He’s heard that the really cool kids will be wearing Slam Dunk Sky Jumpers, the basketball shoes that NBA All-Star Hoop Richardson has been promoting on TV. For $124.99, Ryan can have a pair too. But where can he get the money? Finally he comes up with an ingenious money-making idea.

After a bit of hilarious chaos, Ryan learns that there are more important things in life than Slam Dunk Sky Jumpers.

Published in the Netherlands.

“Well written . . . addresses the themes of conformity, peer pressure, and responsibility in a light but authentic voice”  -School Library Journal

“Hits young adolescent concerns right on the mark . . . with humor and empathy . . . a satisfying story”  -Booklist

The story behind Tarantula Shoes

After moving from Idaho to Arizona (so my wife, Debbie could go to graduate school), then two years later from Arizona to Oregon (we’d been wanting to live in Corvallis for a long time), we found that our oldest daughter, Kelsey, was having a bit of trouble adjusting to life in our new town. It reminded me of when I was a kid and my family moved from North Carolina to Kentucky, and how hard it can be when you don’t know anyone in the neighborhood or new school. So I decided to write a story about a kid who moves.

Since we had just moved from Arizona to Oregon, at first I thought I’d write about the same sort of move. But then I remembered how I’d been wanting to write a story set in Kentucky. After all, I lived there for 14 years. It’s a part of who I am. Here was my opportunity. I started brainstorming ideas and thinking about characters and plot possibilities, and pretty soon as I was clicking away on my computer. Two years of rewriting later, the story was done.

“Welcome to Macinburg, Kentucky!” Dad said as he climbed out of the big U-Haul moving van. I opened the door of the family station wagon, but stayed seated.

Dad smiled at me. “Isn’t it beautiful here, Ryan?” I looked all around, and tried to smile back at him. But right then lightning flashed and — KA-BLAMMO — a big clap of thunder boomed out of the clouds.

The twins, Justin and Ellie, ran over to where Mom stood on the sidewalk, looking up at our new house at 511 Sycamore Street. They grabbed hold of her legs, and hid their faces. She reached down and stroked their red curls. “It’s all right,” she said. “It’s only thunder.”

Mom. She’s always easy on those curtain climbers. I don’t know how she does it. Only a minute earlier I’d been so sick of them singing On Top of Spaghetti I was about to throw up. They must have sung it two hundred times!

“Yeah, it’s only thunder,” I said, more to myself than to the twins. I got out of the car and puffed out my chest, trying to act like someone who’s almost twelve should act — brave and grown up.

But deep down inside, I wasn’t feeling very brave or grown up. Not because of the thunder. I’d heard plenty of boomers during summer storms back in Arizona. I like them, the way the sound comes on with a sudden crack, then rolls around like it’s chuckling because it made the little kids jump.

No, it wasn’t the thunder. It was the upside-down way my life was feeling right then that had me scared. I’d been happy in my little town of Sierra, Arizona. I was born there, and had lived in the same neighborhood all my life. I had friends I’d known since I was in pre-school, and one best friend ever — Patrick. He knew me as well as anybody. The Desert Rats, we called ourselves, when we went exploring up the canyon. But now Dad and Mom had done this awful thing — moved the whole family all the way across the country to this little town called Macinburg, Kentucky — and it had me as jittery as a chicken at the coyote cafe.

I looked around. Not a saguaro or ocotillo cactus in sight. No mesquite trees, or palo verde, either. No whiptail lizards soaking in the sun. No gila woodpeckers. No rocks. Kentucky was all covered up. The trees spread their limbs over the sidewalks like big, green umbrellas. You could barely see the sky, which was all clouds, anyway. And there was no dirt, just grass, all mowed like it was supposed to be carpet. Bushes were everywhere. I was surrounded! Surrounded by green.

But the weirdest part was the air. It made my skin slick with sweat. My T-shirt was so wet it stuck to my back. I could hardly breathe! How could anybody want to live in a place where the air was too thick to get into your lungs? This place was downright scary.

I didn’t let on, though. When you’re the shortest kid your age — even shorter than the girls — you make a point to act big. “Yeah, it’s just thunder,” I said again. “Nothing to worry about.”

Like it was trying to make a liar out of me, another flash of lightning and a big KA-BLAMMO went off nearby. I jumped, and Justin and Ellie let out nervous giggles.

But before I could get off a good warning glare in their direction, Dad said, “That was pretty close. I guess we’d better get inside before it starts to –“

ZZZZZACK! A jagged, crackling bolt of lightning tore across the sky directly over us, and the rain came down like it was dumped out of a bucket on top of our heads.

Mom and Dad and the twins ran for the front porch. I started to run after them, but then remembered Fang, my pet tarantula. He was still on the back seat of the station wagon in his little glass terrarium. No way was I going to leave my best souvenir of the Arizona desert out there alone in the rain. Or my official NBA basketball, either. I jerked the car door open, grabbed them both, and ran after my family, big drops of rain pelting my back. Then I walked into my new home for the very first time.

“This place was built in 1919!” Dad said proudly, standing in the middle of the empty living room.

Mom and Justin and Ellie all smiled up at him like they agreed. I looked at the cracked plaster, chipped paint, dented woodwork, scuffed up floor. Talk about ugly!

Dad glanced my way as if he could read my thoughts. “They knew how to build houses back then. Real craftsmanship,” he said. “Sure it needs a little work . . .”

“A little?” I said under my breath.

Dad strode over to me, grinning like he’d won the lottery instead of bought a disaster with a roof on top. “But who can do a better job of fixing this place up than your mom and me?”

Mom walked over to me, smiling. “Just give it a few days,” she said. “Once our things are unpacked and in place, you’ll start to feel at home.”

Dad leaned very close and his voice changed, dropping almost to a whisper. “This move is a great opportunity, Ryan.”

Here it came again, what I’d heard too many times before: We had moved to Kentucky because an old high school friend had offered Dad a chance to be a partner in his construction business. Work was hard to get in Arizona, but there was plenty here in his old hometown of Macinburg.

For Mom, too. She had gotten a better job at the Bank of Macinburg than she’d had at Sierra Trust in Arizona. “Instead of a teller, I’ll be a financial service representative!”

I didn’t know what a financial service representative was, but from the tone of her voice and Dad’s big grin, I figured that for them it all boiled down to “a great opportunity.” To top it all off, we’d be a lot closer to relatives, they kept saying. Grandma O’Keefe lived just a couple of hours away, in Ohio. And Oma and Opa were only a little farther in the other direction, in some place called Corbin, where Mom had grown up. We’d even get to visit with our cousins down in Atlanta on holidays!

Mom would talk of it all and smile. Dad would nod and say, “A great opportunity.” Over and over and over he’d say it.

But right then I didn’t feel like listening again, so I told them what they wanted to hear, even if I didn’t mean it. (Sometimes you haveto do that with adults — just say what they need you to say — so they’ll get out of your face.) “I know,” I said. “You guys loved it in Kentucky when you were kids.”

The big grin crept back onto Dad’s face. “And you will, too!

Especially this house, once we get it fixed up.” He winked. “There’s a basketball hoop out back.”

Mom put her arm around me. “And here you’ll have your own room. No more sharing with Justin and Ellie.” I glanced over at the twins, who were trying to touch their tonguesto their noses. The idea of having my own bedroom did sound good. They were always into my stuff in Arizona.

“Come see it!” Dad said. “It’s got the same nice woodwork as the rest of the house, and a big window with a view of the backyard. And it’s private, too, off in its own corner.”

I set Fang’s terrarium down on the living room floor and leaned close to see if he was OK. I watched him crawl across the sand and move under the rock I had propped up for him. Just like me, I thought. He’s homesick for the desert, for Arizona.

I set my official NBA basketball next to Fang, then followed Mom and Dad and the twins down a short hallway. Dad opened a door.